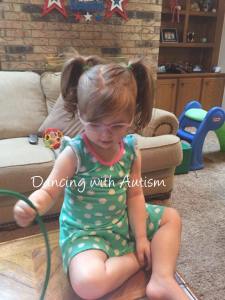 It seems like every now and then Lila goes into overdrive and we start seeing so many changes that all happen at once. Now is definitely one of those times! She is doing so many new things, and in no particular order:

Lila starts at the special needs pre-K exactly 3 weeks from today. We’re doing what we can to try and prepare her – I created a social story on the iPad using pictures from her actual school and classroom, she’s been watching school-related episodes from her favorite shows, and I’ve been telling her about what is going to happen. I wish we could do more – I know it’s going to be a rough couple of weeks at the start (Janet has fully prepared us). Hoping for as smooth a transition as possible, and excited to see what the rest of the year has in store for all of us!