I’ve been trying to start writing this for the past few days, and I just can’t seem to find the perfect words to accurately describe our trip to Tulsa to meet Rachel from “Signing Time”.

Lila has loved Rachel and the show for a very long time – like with most things that just naturally “click” with her, it involves music. Lila and I actually communicate in song a lot of the time, for transitions and therapy purposes, as well as for fun – she loves it when I take music from her favorite shows and both sing the song and act out what’s happening on the TV screen. It’s been a way into her world, and it’s the place where it appears the most seamless for us to meet in the middle.

Rachel is the reason Lila started wearing her glasses, and the reason for a few of her words she has attempted along the way. Although she uses picture cards instead of signing, she always seems more motivated to try and say a word when there’s a fun sign involved (“octopus”, “elephant”, and “crab” to name a few). Plus the many countless hours of us doing the “Hopkins Hop!”.

I had been excited (and to be perfectly honest with you – in a way… dreading) this trip for a while. Lila loves “Signing Time”, and I wanted her to have the opportunity to meet Rachel… but the prospect of taking her all the way to Tulsa, into a concert venue, and getting her back here without major upset was a dicey undertaking at best.

It’s difficult to feel home-bound so often. Trips to the grocery store, a restaurant, anywhere new, and especially in public – it’s never easy, for any of us. Aside from the obvious issues with change in routine and new places, there are always plenty of sensory assaults that lie in wait – lighting, sounds, etc.; situations far beyond my control. But…I didn’t want her to miss out. What if for the first time at such an event…. she actually had FUN?

So Bill, Lila, Janet, and I ended up heading out later on Saturday than we should have. I was scared to have her there too long before show time because I knew that in the unfamiliar environment before the show, she most likely wouldn’t last long. Rachel messaged us and said she could see Lila prior to the show, and by the time we found out, we were cutting it very, very close.

Once we made it there and made our way down to the stage, they met us in the wings. It was dark, and Lila’s anxiety started to rise quickly. She started to melt down…. and then something amazing happened. Rachel Coleman started singing…. “It’s Signing Time with Lila and Rachel…”

Now – unfortunately I didn’t get it on video, but I can promise you – it’s a moment I’ll never forget. It was truly an honor to witness. You could instantaneously see Lila shift… back from the brink. They had such a sweet interaction where Rachel gave her a couple of stickers (which Lila held onto throughout the show by the way), and we took a few pictures. Rachel couldn’t have been any kinder, and to go out of her way like that, well – it just meant the world to us.

We headed back out for the show – and can you believe it? Lila lasted a whole hour. She climbed up and (mostly down) the stairs – oftentimes just trying to get back down to her new friend, Rachel. There were a few incredible points about this: First of all – Lila doesn’t react like that to hardly anyone, it was incredible to see her continually try and get back to Rachel. It was so truly adorable to watch. Second of all: no one seemed to care that Lila was meandering around on the stairs. Everywhere I looked – every kind of disability and all sorts of “Team Quirky” surrounded us. Flapping, vocal stims, and everywhere I looked… kind eyes. These were our people, and that in and of itself was truly an amazing experience.

During one of Lila’s trips to try and get closer to Rachel, she slipped on the stairs and when she stood up – conked her head a bit on the railing. She started to get upset and I tried to calm her. It didn’t work, and that ended up precipitating a meltdown that would eventually cause us to have to leave. However despite that – we consider it an incredible success. Going to the concert and having it go so well was sort of transformative in a way. I feel confident that we can do more now than we have ever been able to in the past. We’re pushing her boundaries – and she astounds me at every turn. She’s one of my greatest teachers.

Later that night Rachel messaged me with a sweet note that included the following: “Thank you so much for being daring when I know that most times it’s just easier to stay home.” She truly “gets” it. And I’m so grateful that we were able to meet up with her. She’s such a kind, down-to-earth, and genuinely beautiful person – both inside and out. If she ever comes back to Oklahoma, you better believe we’ll go and see her again!

Sending so much love and light to Rachel Coleman and her beautiful family! ♥

P.S.: Thank you so much for putting the beautiful video above together, Janet. And thank you for coming with us and for just being so incredibly wonderful! 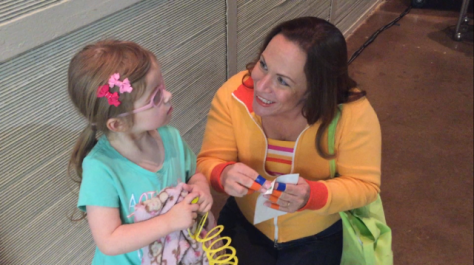 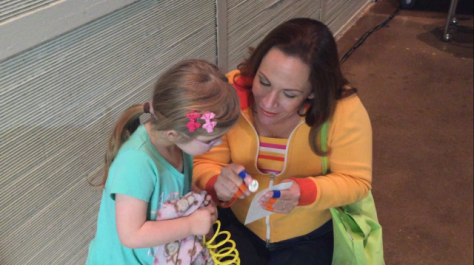