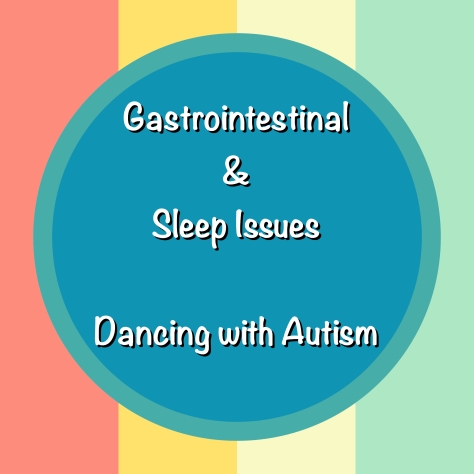 I’ve been getting a lot of questions on both GI and sleep issues… I feel your frustration (and utter desperation!). I’ve been there (ask Janet), so I will say the following:

ALL of our autistic kiddos are so vastly different, as with so many things, what works for one may not work for another.

However, here is what has worked for us:

Lila has been through a battery of GI tests (catheterized to check kidney function, X-rays, an upper GI, dysphagiagram, and an endoscopy as well). Know what they have been able to tell us?…. absolutely nothing. They can’t find any physical reason for her GI issues – they attribute it directly to her autism, and the brain’s (apparently flawed) connection with her gut.

We have been holding steady for the past year or so with the best results we’ve had so far – and that includes: acid reflux medicine, prescription gas medicine, a daily dose of Miralax, multiple types of probiotics, and switching her from cow’s milk to vanilla almond milk.

You’re going to ask about diet (I know you are) J, and we’ve been there tried that. Lila has severe oral sensory issues and is what’s considered a “problem feeder”. She eats less than 5 “foods”. When we took her gluten-free, she stopped eating altogether. It was very scary, and not something we intend on trying again any time soon.

Holy smokes… let me say that Lila did not sleep through the night until after she turned 2 years old. It was brutal – I can’t even believe the impact that sleep deprivation can have on every single aspect of your life. We were up approx. 3 hours per night in the middle of the night – every night. Looking back at it, I have no idea how I still managed to make it to work every day.

As far as sleep issues are concerned, here is what has worked for us: a white noise machine, making sure no light gets into her room via the window, and creating a highly predictable bedtime routine as well, including a “first-then” countdown to bed-time.

Medication – we tried melatonin, we heard so many wonderful things about it, and I know it works really well for some children. It didn’t work well at all for us – we experienced increased night-waking, and what appeared to be night terrors as well.

At the recommendation of our pediatrician’s nurse, we tried putting Lila on Cyproheptadine (Periactin). For whatever reason, that has worked extremely well for us. We give it to her in her vanilla almond milk around 8pm. She still doesn’t go to sleep until 10-10:30pm, but she does sleep through the night. It’s been nothing short of a miracle, as far as I’m concerned.

***I’ve also been getting a lot of questions in regard to the floor-time/play therapy we use with Lila 24/7, along with the other components we throw in the mix from time to time (RDI, some modified ABA, TEEACH, etc) – and I will expand on that in the near future. Thank you all for being here and as always, lots of love to you and your beautiful families!

One thought on “Gastrointestinal & Sleep Issues”