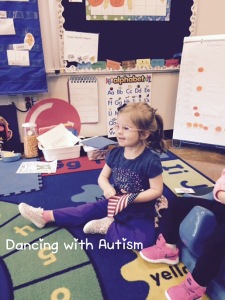 I heard horror stories of going into the public school system. Tales of IEP nightmares, teachers who won’t listen or cooperate, refusal of certain services, and even mistreatment of some special needs children. Well…we must have just flat lucked out – have I mentioned how much we LOVE the school Lila is in for her special needs pre-K class?

She was SO open to sharing ideas! “Use balloons, bubbles – say “ready, set”, then she will say “go!”. Throw the balloon up in the air and say “yay!”- she will be so excited that someone else knows her games!” The speech path then said that Lila won’t use the picture cards they have there. I looked and we immediately saw why…. velco. She has some sort of a sensory issue with velcro. So the next day Bill and I sent her a magnetic whiteboard, some magnetic strip, and some balloons to use with Lila.

Then they had an issue this morning with transition to and from speech therapy. Lila melted down and then had a rough remainder of the day. I suggested they try a “First-Then” countdown like we use at home in regard to difficult transitions, and I sent her a detailed description of what works for her at home. Her teacher e-mailed me back within 10 min and said they would have First-Then transition boards ready for her to use on Wednesday – and she said they really appreciate me (I promise you it’s not near as much as we appreciate them!!!).

I honestly can’t even tell you how amazing this has been, we are so blessed. We love Lila’s new teacher, speech path, and occupational therapist up at the school. Sage is doing such a great job with her at in-home daycare as always, then there’s Bill and me of course – and Janet – who is now family (and also still my Executive Advisor on all things Lila).

Short Side Note: Janet and I are just starting work on adding a NEW therapy technique to the mix – will keep you updated on that little venture as well 😉

I LOVE it that we can all work so hard in conjunction with each other to make things better for Lila – we all make such a great team!